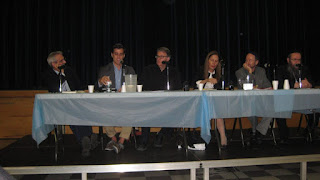 In the Orthodox world, just talking about the LGBT community is “the first stumbling block,” Elliott Malamet said at a May 26 panel he moderated.”

Rabbi Daniel Korobkin of Thornhill’s Beth Avraham Yoseph of Toronto congregation said that, for too long, Orthodox communities have been “perhaps less than stellar” in fulfilling the mitzvah of loving the stranger, particularly the gay community. In his opening remarks, he promised “judgment-free friendship,” but said that as an Orthodox rabbi he could not endorse or celebrate gay marriage and lifestyle. He said members of his community who believe gays should not have a place in shul think he is speaking inappropriately, while others feel he needs to do more.

Parents of gay kids also have to come out, Malamet noted.

Seidman, whose then-teenage son came out in 1995, said she and her husband were initially upset, fearful, confused and sad. They let their son know how much they loved him but, in what she now regards as an “ignorant” move, kept his identity secret.

Telling others “helps you be real with people,” she said, adding that, in most cases, relationships became closer.

Expressing a similar concern, Rabbi Rapoport said the most important thing for him is to save lives, and not allow people to be estranged from each other or Judaism.

He said he doesn’t believe in throwing out “the baby with the bathwater” if a person violates a halachic prohibition. He also said that lifelong celibacy is “near impossible” because of the strong human sexual drive and need for love, companionship and intimacy.
He noted that many Jews remain committed to Torah despite unresolved theological issues.

Rabbi Chaim Strauchler of Shaarei Shomayim Congregation, who closed the program, called on the community to move forward together, and expressed hope that they would care for one another and see each other as family.Grossman, 23, who grew up at Shaarei Shomayim, used to pray to be able to stop having feelings about other males. Until second year university, when he came out to a supportive friend, he thought he would have to give up everything else that was important to him – his values, his family, his friends and his Judaism – if he were to pursue his feelings, “and maybe be happy.”

Rabbi Greenberg said an Orthodox gay person “needs to come up with an understanding of ancient text, whether or not approved, in order to hold onto God.” He noted that the only references to homosexual behaviour in Genesis are violent and degrading, suggesting that the prohibition against gay male sex in Leviticus may be based on an ancient belief that doesn’t account for loving and committed relationships.

He also shared the analogy – articulated, he said, by a number of poskim (halachic decisors) – that God does not hold those under duress culpable, and that gay people might be considered to be under psychological duress. While “not the perfect solution,” it could open some Orthodox doors.

“I want to walk into a shul where the rabbi says, ‘I’ve got a good halachic rationale for basically saying, ‘You’re doing the best you can… We’re going to welcome couples and families.’”