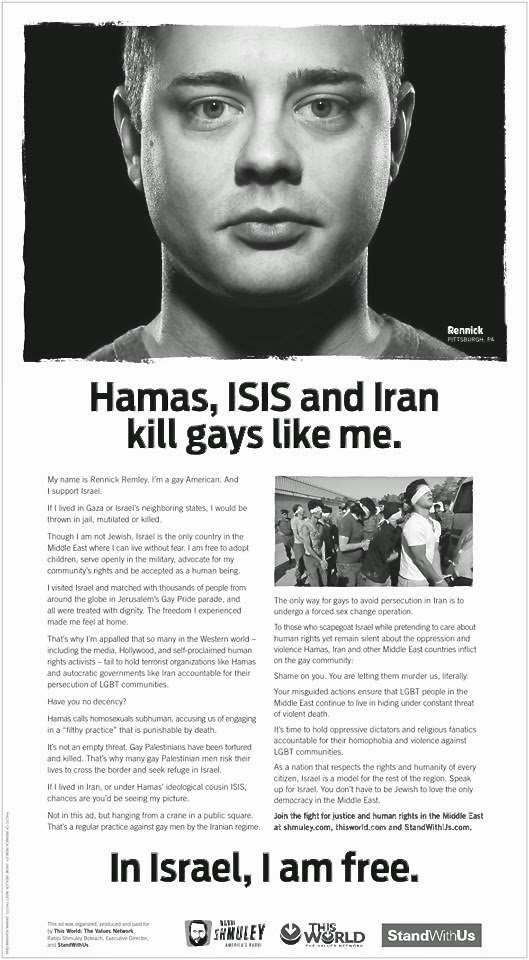 12/22/2014- I expect to be attacked from two camps this week. The first, as usual, is the Israel haters who follow my trail on the Internet like dogs in heat. The second is people who love Israel but who think homosexuality is Judaism’s greatest sin. Both might find common cause to condemn a full-page ad that my organization, This World: The Values Network, and Stand With US have taken out in The New York Times this week.

The ad features a close friend of mine named Rennick proclaiming in a bold headline: “My name is Rennick Remley. I’m a gay American. And I support Israel.”

I first began conceiving the ad during the Gaza war this summer. I was astonished that the LGBT lobby in the US did not come out forcefully to defend Israel and condemn Hamas. I was even more appalled that so many liberally-minded students and academics, who fight for gay rights every day, could be on the side of Hamas.

In the ad Rennick, a very special young man who courageously agreed to speak out, is candid and plainspoken: “If I lived in Gaza or Israel’s neighboring states, I would be thrown in jail, mutilated or killed. Though I am not Jewish, Israel is the only country in the Middle East where I can live without fear. I am free to adopt children, serve openly in the military, advocate for my community’s rights and be accepted as a human being.”


Since these facts are indisputable, how can liberals side with Hamas, a gay-hating, radically homophobic, murderous and barbarous death cult? Rennick continues: “I visited Israel and marched with thousands of people from around the globe in Jerusalem’s Gay Pride parade, and all were treated with dignity. The freedom I experienced made me feel at home.”

Rennick and I visited Israel together. He is a Protestant and takes his religion seriously.

He fell in love with Israel and was amazed at its openness, tolerance, and vibrancy. Many religious Jews will be upset at this article.

Let’s treat homosexuality as the same sin as lighting a cigarette on the Sabbath or eating bread during Passover, equally severe transgressions in the Torah.

Gay men come to me all the time and tell me that they were born gay, were never attracted to women, and want to lead a Jewish life.

What should they do? I respond, “There are 613 commandments in the Torah, including not engaging in same-sex relations and the obligation to marry and have kids. You have 611 commandments that will easily occupy your time. Now, stop focusing on sexual orientation and go out and be a Jew. Wear a kippa and identify proudly with your people. Keep a kosher home. Have a mezuzah on your door. Honor the Sabbath and rest on God’s holy day. Put on tefillin daily. Respect the Jewish festivals. Love God and all His children. Support and defend Israel against the endless enemies arrayed against it.”

My second response is that Israel is the Jewish state, but, unlike many of its barbarous neighbors, it does not impose religion on anyone. It believes in freedom of conscience. The most central idea of Judaism is freedom of choice. No-one dare ever be forced to be religious.

And third, God divided the Ten Commandments into two tablets: one for religious sin, the other for moral sin. A religious sin is “You shall have no other gods before me.” A moral sin is “Do not murder. Do not commit adultery. Do not steal.” Each of these involves injury to a third party. Homosexuality is a religious rather than a moral sin, akin to the prohibition of eating non-kosher food. It involves no injury to an unknowing party.

I am so proud that Israel treats all gay men and women with total equality, respect and inclusion. And I utterly condemn left-wing hypocrites who support Israel’s enemies, like Iran, even as they brutally murder men and women simply for being gay.

Rennick says it best: “That’s why I’m appalled that so many in the Western world – including the media, Hollywood and self-proclaimed human rights activists – fail to hold terrorist organizations like Hamas and autocratic governments like Iran accountable for their persecution of LGBT communities. Have you no decency? Hamas calls homosexuals subhuman, accusing us of engaging in a ‘filthy practice’ that is punishable by death.”

Rennick is right. Gay Palestinians are routinely tortured, maimed and killed by Hamas and there are many reports of gay Palestinian men risking their lives to find sanctuary in Israel.

Iran, of course, is even more barbarous, regularly and infamously hanging gays from cranes in public squares. You could of course avoid all that if you’re a gay man in Iran by simply having a forced sex-change operation.

Good thing Iran has no gays, as Mahmoud Ahmedenijad famously told a Columbia University audience in 2005.

Rennick closes his ad powerfully by indicting the Western liberal elites who condemn Israel and support terrorists like Hamas: “Shame on you. You are letting them murder us, literally. Your misguided actions ensure that LGBT people in the Middle East continue to live in hiding under constant threat of violent death.

“It’s time to hold oppressive dictators and religious fanatics accountable for their homophobia and violence against LGBT communities. As a nation that respects the rights and humanity of every citizen, Israel is a model for the rest of the region. Speak up for Israel.

“You don’t have to be Jewish to love the only democracy in the Middle East. In Israel, I am free to be me.”

The author, whom Newsweek and The Washington Post call “the most famous Rabbi in America,” is the founder of This World: The Values Network, the world’s leading organization defending Israel in the media. He is the author of Judaism for Everyone and 29 other books. Follow him on Twitter @RabbiShmuley.
http://www.jpost.com/landedpages/printarticle.aspx?id=385442