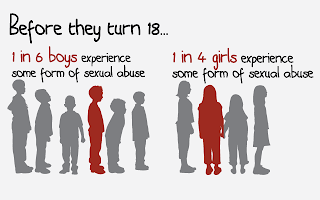 7/22/13 by Frank Bruni- The men were spiritual leaders, held up before the children around them as wise and righteous and right. So they had special access to those kids. Special sway.
And when they exploited it by sexually abusing the children, according to civil and criminal cases from different places and periods, they were protected by their lofty stations and by the caretakers of their faith. The children’s accusations were met with skepticism. The community of the faithful either couldn’t believe what had happened or didn’t want it exposed to public view: why give outsiders a fresh cause to be critical? So the unpleasantness was hushed up.
This is not a column about the Catholic Church.
This is a column about Orthodox Jews, who have recently had similar misdeeds exposed, similar cover-ups revealed.


And I’m writing it, yes, because the Catholic Church over the last two decades has absorbed the bulk of journalistic attention, my own included, in terms of child sexual abuse. There are compelling reasons that’s been so: Catholicism has more than one billion nominal adherents worldwide; endows its clerics with a degree of mysticism that many other denominations don’t; and is just centralized enough for scattered cover-ups to coalesce into something more like a conspiracy. The pattern of criminality and evasion has been staggering.
But some of the same dynamics that fed the crisis in Catholicism — an aloof patriarchy, an insularity verging on superiority, a disinclination to get secular officials involved — exist elsewhere. And the way they’ve played out in Orthodox Judaism illustrates anew that religion isn’t always the higher ground and safer harbor it purports to be. It can also be a self-preserving haven for wrongdoing.
Early this month, 19 former students of the Yeshiva University High School for Boys in Manhattan filed a lawsuit alleging sexual abuse by two rabbis in the 1970s and 1980s who continued to work there even after molestation complaints. The rabbis were also allowed to move on to new employment without ever being held accountable. School administrators, the lawsuit alleges, elected not to report anything to the police.
Rabbi Norman Lamm, the president of Yeshiva at the time, admitted as much in an interview with The Jewish Daily Forward. He said that when accusations against a faculty member were “an open-and-shut case,” he’d let the accused person “go quietly.”
Back then there was less alarm about, and understanding of, child molestation, he said. Back then he was also steering Yeshiva through grave financial hardship. A sex-abuse scandal wouldn’t have been a great fund-raising tool.
“The school made the conscious and craven decision to protect its reputation,” Kevin Mulhearn, the lawyer representing the plaintiffs, told me Monday.
Is such a defensive mind-set really a relic of a less enlightened past? Earlier this year a prominent scholar at Yeshiva University, Rabbi Hershel Schachter, was caught on audiotape at a conference in London telling Orthodox leaders that Jewish communities should set up their own review boards to evaluate any complaints of child sexual abuse and determine whether to bother with the police. This contradicts state laws on mandatory reporting for teachers, counselors, physicians and such.
Schachter further discouraged police involvement by warning that accused abusers could wind up “in a cell together with a shvartze, in a cell with a Muslim, a black Muslim who wants to kill all the Jews.” Shvartze is a harshly derogatory racial term. Yeshiva University condemned the remarks but seemingly didn’t discipline Schachter, who didn’t respond to my request Monday for comment. Neither did Rabbi Lamm.
Rabbi Schachter’s aversion to law enforcement isn’t isolated. The ultra-Orthodox group Agudath Israel of America has taken the position that observant Jews should get a green light from a rabbi before notifying police about suspected molestation. It’s precisely this sort of internal policing that the Catholic Church did so disastrously, leaving abusers unpunished and children in harm’s way.
Ultra-Orthodox Jews in particular have prioritized their image and independence over justice. They have shunned Jews who took accusations outside their communities; in fact, Charles Hynes, the Brooklyn district attorney, has cited that as a reason for minimizing publicity around child sexual abuse cases among Orthodox Jews. But over the weekend he changed tacksand gave The New York Post the names of some 40 convicted people.
Community intimidation is why 17 of the 19 plaintiffs in the Yeshiva case are identified only as John Doe, said Mulhearn, their lawyer, who mentioned another insidious wrinkle reminiscent of Catholic cases.
One of the abusers, he said, used religion itself to muffle a few abused boys. The rabbi allegedly invoked the Holocaust, which their parents had survived, telling the boys not to cause mom or dad any more suffering with a public stink.
http://www.nytimes.com/2013/07/23/opinion/bruni-the-faithfuls-failing.html?nl=todaysheadlines&emc=edit_th_20130723&_r=0