From 1989: "Here" Comes The Groom, A (Conservative) Case For Gay Marriage" - The New Republic 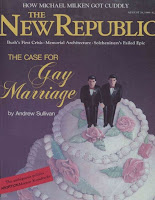 Last month in New York, a court ruled that a gay lover had the right to stay in his deceased partner’s rent-control apartment because the lover qualified as a member of the deceased’s family. The ruling deftly annoyed almost everybody.

Conservatives saw judicial activism in favor of gay rent control: three reasons to be appalled. Chastened liberals (such as the New York Times editorial page), while endorsing the recognition of gay relationships, also worried about the abuse of already stretched entitlements that the ruling threatened.

What neither side quite contemplated is that they both might be right, and that the way to tackle the issue of unconventional relationships in conventional society is to try something both more radical and more conservative than putting courts in the business of deciding what is and is not a family. That alternative is the legalization of civil gay marriage.

The New York rent-control case did not go anywhere near that far, which is the problem. The rent-control regulations merely stipulated that a “family” member had the right to remain in the apartment. The judge ruled that to all intents and purposes a gay lover is part of his lover’s family, inasmuch as a “family” merely means an interwoven social life, emotional commitment, and some level of financial interdependence.

It’s a principle now well established around the country. Several cities have “domestic partnership” laws, which allow relationships that do not fit into the category of heterosexual marriage to be registered with the city and qualify for benefits that up till now have been reserved for straight married couples.

San Francisco, Berkeley, Madison, and Los Angeles all have legislation, as does the politically correct Washington, D.C. suburb, Takoma Park. In these cities, a variety of interpersonal arrangements qualify for health insurance, bereavement leave, insurance, annuity and pension rights, housing rights (such as rent-control apartments), adoption and inheritance rights. Eventually, according to gay lobby groups, the aim is to include federal income tax and veterans’ benefits as well.

A recent case even involved the right to use a family member’s accumulated frequent-flier points. Gays are not the only beneficiaries; heterosexual “live-togethers” also qualify.
There’s an argument, of course, that the current legal advantages extended to married people unfairly discriminate against people who’ve shaped their lives in less conventional arrangements. But it doesn’t take a genius to see that enshrining in the law a vague principle like “domestic partnership” is an invitation to qualify at little personal cost for a vast array of entitlements otherwise kept crudely under control.

To be sure, potential DPs have to prove financial interdependence, shared living arrangements, and a commitment to mutual caring. But they don’t need to have a sexual relationship or even closely mirror old-style marriage. In principle, an elderly woman and her live-in nurse could qualify. A couple of uneuphemistically confirmed bachelors could be DPs. So could two close college students, a pair of seminarians, or a couple of frat buddies.

Left as it is, the concept of domestic partnership could open a Pandora’s box of litigation and subjective judicial decision-making about who qualifies. You either are or are not married; it’s not a complex question. Whether you are in a “domestic partnership” is not so clear.

More important, the concept of domestic partnership chips away at the prestige of traditional relationships and undermines the priority we give them. This priority is not necessarily a product of heterosexism. Consider heterosexual couples. Society has good reason to extend legal advantages to heterosexuals who choose the formal sanction of marriage over simply living together. They make a deeper commitment to one another and to society; in exchange, society extends certain benefits to them.

Marriage provides an anchor, if an arbitrary and weak one, in the chaos of sex and relationships to which we are all prone. It provides a mechanism for emotional stability, economic security, and the healthy rearing of the next generation. We rig the law in its favor not because we disparage all forms of relationship other than the nuclear family, but because we recognize that not to promote marriage would be to ask too much of human virtue.

In the context of the weakened family’s effect upon the poor, it might also invite social disintegration. One of the worst products of the New Right’s “family values” campaign is that its extremism and hatred of diversity has disguised this more measured and more convincing case for the importance of the marital bond.

The concept of domestic partnership ignores these concerns, indeed directly attacks them, this is a pity, since one of its most important objectives—providing some civil recognition for gay relationships—is a noble cause and one completely compatible with the defense of the family. But the way to go about it is not to undermine straight marriage; it is to legalize old-style marriage for gays.

The gay movement has ducked this issue primarily out of fear of division. Much of the gay leadership clings to notions of gay life as essentially outsider, anti-bourgeois, radical. Marriage, for them, is co-optation into straight society. For the Stonewall generation, it is hard to see how this vision of conflict will ever fundamentally change. But for many other gays—my guess, a majority—while they don’t deny the importance of rebellion 20 years ago and are grateful for what was done, there’s now the sense of a new opportunity. A need to rebel has quietly ceded to a desire to belong. To be gay and to be bourgeois no longer seems such an absurd proposition. Certainly since AIDS, to be gay and to be responsible has become a necessity.

Gay marriage also places more responsibilities upon gays: It says for the first time that gay relationships are not better or worse than straight relationships, and that the same is expected of them. And it’s clear and dignified. There’s a legal benefit to a clear, common symbol of commitment. There’s also a personal benefit. One of the ironies of domestic partnership is that it’s not only more complicated than marriage, it’s more demanding, requiring an elaborate statement of intent to qualify. It amounts to a substantial invasion of privacy. Why, after all, should gays be required to prove commitment before they get married in a way we would never dream of asking of straights?

Legalizing gay marriage would offer homosexuals the same deal society now offers heterosexuals: general social approval and specific legal advantages in exchange for a deeper and harder-to-extract-yourself from commitment to another human being. Like straight marriage, it would foster social cohesion, emotional security, and economic prudence.

Since there’s no reason gays should not be allowed to adopt or be foster parents, it could also help nurture children. And its introduction would not be some sort of radical break with social custom. As it has become more acceptable for gay people to acknowledge their loves publicly, more and more have committed themselves to one another for life in full view of their families and their friends, A law institutionalizing gay marriage would merely reinforce a healthy social trend. It would also, in the wake of AIDS, qualify as a genuine public health measure. Those conservatives who deplore promiscuity among some homosexuals should be among the first to support it. Burke could have written a powerful case for it.

To put it bluntly, there’s precious little evidence that straights could be persuaded by any law to have sex with—let alone marry—someone of their own sex. The only possible effect of this sort would be to persuade gay men and women who force themselves into heterosexual marriage (often at appalling cost to themselves and their families) to find a focus for their family instincts in a more personally positive environment. But this is clearly a plus, not a minus: Gay marriage could both avoid a lot of tortured families and create the possibility for many happier ones. It is not, in short, a denial of family values. It’s an extension of them.

Of course, some would claim that any legal recognition of homosexuality is a de facto attack upon heterosexuality. But even the most hardened conservatives recognize that gays are a permanent minority and aren’t likely to go away. Since persecution is not an option in a civilized society, why not coax gays into traditional values rather than rail incoherently against them?
There's a less elaborate argument for gay marriage: It’s good for gays. It provides role models for young gay people who, after the exhilaration of coming out, can easily lapse into short-term relationships and insecurity with no tangible goal in sight.

My own guess is that most gays would embrace such a goal with as much (if not more) commitment as straights. Even in our society as it is, many lesbian relationships are virtual textbook cases of monogamous commitment. Legal gay marriage could also help bridge the gulf often found between gays and their parents. It could bring the essence of gay life—a gay couple—into the heart of the traditional straight family in a way the family can most understand and the gay offspring can most easily acknowledge. It could do as much to heal the gay-straight rift as any amount of gay rights legislation.

If these arguments sound socially conservative, that’s no accident. It’s one of the richest ironies of our society’s blind spot toward gays that essentially conservative social goals should have the appearance of being so radical. But gay marriage is not a radical step. It avoids the mess of domestic partnership; it is humane; it is conservative in the best sense of the word. It’s also practical. Given the fact that we already allow legal gay relationships, what possible social goal is advanced by framing the law to encourage these relationships to be unfaithful, undeveloped, and insecure?

This article appeared in the August 28, 1989 issue of the magazine.