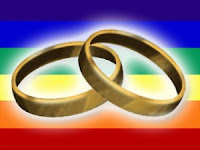 6/7/12- The OU, RCA, and Agudath Israel of America have recently issued public statements expressing their dismay as the movement to grant same sex couples marriage rights gains momentum. Similarly, the OU and Agudath Israel of America issued a statement expressing their displeasure with the now famous contraceptive mandate in Obamacare.
While the two statements are similar, they are also very different. The Torah prohibits a specific kind of male on male lovemaking. The Torah does not recognize, or even provide a mechanism for two men or two women to wed in a religious ceremony. Legalizing same sex marriage is seen as an affront to these values. However, the Torah does not prohibit contraception. Yet, the orthodox Jewish organizations rallied together to support the Catholic Church which does prohibit contraceptive use for its membership.
The most reasonable explanation for these statements is that the orthodox Jewish organizations fear that if legislation is passed that is not consistent with the values of orthodox Judaism, those who practice orthodox Judaism could be subject to discrimination lawsuits. This explains their support of the Catholic Church in the battle over birth control. Although the issue does not affect orthodox Jews per se, it does have a collateral effect in that it could set dangerous precedent for governmental interference with religious practices and beliefs which could give rise to discrimination claims against orthodox Jews.