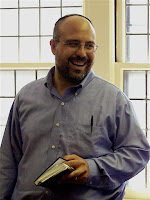 On a recent Shabbat, Bais Abraham hosted speakers from Eshel  (www.eshelonline.org),  a national organization building communities of support, learning, and inclusion for Orthodox lesbian, gay, bisexual, and transgender Jews.  The three speakers were LGBT Orthodox individuals, two of whom came to observance later in life and one of whom grew up Chassidic.  They each shared their personal journey of what it is like for them to be LGBT in the Orthodox community today.  A recent Orthodox rabbinic effort to show compassion and support for LGBT Orthodox members of the Jewish family is reflected in the Statement of Principals signed by over 200 Orthodox rabbis.  It can be found athttp://statementofprinciplesnya.blogspot.com/ .

Over the past two weeks, I received many questions about our Shabbat program from people from different parts of the Orthodox and general Jewish communities.  Here are some of the questions and my responses:

Q. Why don’t you just keep quiet about this? If someone is gay, let them sit in shul like anyone else.  Why should we bring this out into the open and discuss it?
To remain silent is to reject people.  We tend to demonize and stigmatize what we do not know.  Individuals who fall prey to social stigmas are forced to feel like outsiders because no one will talk about their issues.  Such individuals keep their conditions hidden but the cost will be that they do not feel part of the community.  They will hear loud and clear what people implicitly feel, that they are flawed.  In addition, there will be no forum or opportunity in which to educate others in the community about the suffering of the stigmatized individuals, thus there is no possibility for sensitivity to their experiences. This can result in a feeling of rejection, and psychological, if not actual, aloneness.   When we ignore the challenges of people in our community and ignore our own conscious or unconscious rejection of them, we cannot expect them to feel included, and we cannot love them as ourselves.  This is the case for LGBT Orthodox Jews.

Q. How can you feature something that is a violation of Jewish law?
Halacha (Jewish law) is, of course, of central importance to us as Orthodox Jews.  Our Shabbat program, however, was not designed to focus on halacha.  That is something that  that every Orthodox LGBT person discusses privately with his or her rabbi.  Our program was about moving toward a culture in which LGBT Jews do not have to feel excluded from the Orthodox community.  It was to find a place of compassion and inclusion, so LGBT Orthodox Jews do not feel like outsiders, which historically has led to losing them entirely to Yiddishkeit, or worse.
Before we judge anyone who is LGBT or condemn them in the abstract, we owe it to ourselves to humanize this topic and hear real people tell their very real stories, or else we may violate the saying in  Pirkey Avot, Al tidan es chavero ad shetagia li’mikomo.  Do not judge another person until you have been in their place.  Many would like to pretend that there are no LGBT people in our midst, but the weekend not only showed us that they are members of our community, but also underscored that they are our neighbors, our children, our brothers, our sisters, and our friends.  They are in the stories presented to us, devout individuals who truly value Torah and mitzvot.

Q. Rabbi, does having this panel serve any religious purpose for those of us who are not LGBT?  What can the rest of us learn from this about our own avodat Hashem (service to God)?
I found it inspiring that when faced with something that would make it so difficult to be observant and to remain within the Orthodox community–a community with little sensitivity to the feelings of those who are gay–they choose, despite feeling alienated, to remain in the community.  Their love for Torah, for mitzvot, for Hashem and for the Jewish People is so strong that though it would be much easier to leave Orthodoxy, they do not.   Among other things, we can learn from LGBT Orthodox Jews about commitment to Torah even in very difficult circumstances.

Q. If someone LGBT wants to be in our community, do you expect us to accept them?  To give them aliyot?
In many shuls, even people who violate weighty mitzvot of various types between humans and G-d and between humans and other humans, are welcomed.  Why should we treat the LGBT Jews any differently?  Indeed it could be argued that not keeping kosher or other important mitzvot is a choice, and LGBT, as we now know, is not a choice.  If it were, the vast majority of Orthodox LGBT people would choose not to be LGBT.  With regard to people who are transgender, the halachic question arises with regard to whether to give them aliyot and where they should sit in shul.  There are various opinions among poskim as to the status of the gender of transgender people, depending upon where in the process of transition they are.


Q. If you accept someone who is gay with a partner into the shul (since having a partner implies that they are intimately involved), then you are accepting something immoral.  If you do away with standards of morality, then what’s to prevent you from welcoming a brother married to a sister?
The Rambam (Shmoneh Pirkim, 6) includes sexual violations in the category of ritual mitzvot that have nothing to do with morality.  Therefore, just because the Torah forbids both homosexual sexual acts and incest does not mean that they are morally equivalent, though both are halachically forbidden. We can say homosexuality is forbidden but we cannot say it presents a slippery moral slope.
Orthodox communities don’t have a custom of judging unfavorably what people are doing in their intimate lives.  If we walk past a couple’s bedroom and the beds are pushed together, we assume they have followed halacha in terms of their intimate lives. We do not question who does and does not go to the mikvah and we assume that anyone who has any halachic challenges in their intimate lives is seeking the proper hadracha (guidance) in this in the way they carry out the complexities of their challenges.

Q. Isn’t treating a gay couple (with children) the same as other families in our shul a slippery slope?
As Orthodox Jews we all try our best to adhere to the halacha in it’s entirety in our desire to best serve Hashem, and we acknowledge that our fellow Torah-observant Jews strive to do the same or grow continually in that direction.  That being said, it is not our responsibility or objective to oversee or judge the quality of everyone’s observance, especially in their private lives.  Rather than looking to anyone’s private life, which is ultimately between those two people and, if Torah-observant, their Rabbi, let us rather enjoy and respect what is going on in their living rooms: welcoming guests, being careful with kashrut, not speaking loshon hara, honoring their fellow Jew, and raising Torah-centered families with Torah-centered values.  Throwing the proverbial baby out with the bathwater by rejecting them, serves no purpose.  This is a reality in our community and we need to start taking fundamental steps of inclusion and not persecution and/or condemnation.

Q. Won’t having gays in shul influence others to experiment with their sexuality and perhaps decide to be gay?
It is quite clear that people do not just decide to be LGBT.  This is especially so of religious people.  All of our participants testified to being born gay.  Who indeed would choose to be gay and have to deal with the inner turmoil and alienation that they described?

Q. Why not suggest gay people get married to members of the opposite gender and stay in the closet?
Many gay Orthodox Jews do marry people of the opposite gender, hoping Hashem will perform a miracle and make it work, but alas, to no avail.  We are who God made us.  The pressure within the Orthodox community that is upon them, as we keep fixing them up with people of the opposite gender, as we keep assuming that no one is gay, pushes person after person into heterosexual relationships that only end up with both partners deeply  hurt.  Let’s stop assuming that every person who has not gotten married is looking for a heterosexual shidduch.   It can lead to devastating results.
In sum, in most Orthodox communities today, LGBT members face rejection. Instead, imagine an Orthodox community that says to them, we understand you are LGBT and we understand the challenges you face as you try to lead an Orthodox life.  Stay in the community.  We accept you as a member of our family.  Instead of leaving because you feel no compassion from us, stay and build a frum home, feel part of our community, be as whole with your Creator, with the Torah, and the Jewish people as you can.  We are here to support you, not judge you.  None of us are tzadikim.