"I Am No Abomination:Rewritten Bar Mitzvah Speech, 30 years later" by Amichai Lau-Lavie 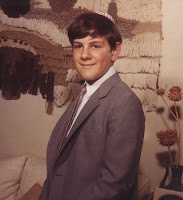 4/18/13- I grew up Orthodox in Israel. By the time of my bar mitzvah—in April 1982—I was living in New York City, a sweet kid in a polyester suit. A little on the chubby side, perhaps. My dark blond mop of hair covered a pimpled forehead.

Being Orthodox had its advantages. Chanting my bar mitzvah portion was no problem. I rattled it off with ease. The problem was the speech. There was so much I wanted to say, but my English wasn’t good enough, and anyway, my speech had been written for me by my uncle, a renowned rabbi, who gave me a tired presentation expounding on the laws of charity.
Thirty years on, I would like to think that if the choice had been mine, and I had been able to summon the courage, this is the speech I would have delivered at the Fifth Avenue Synagogue in Manhattan.