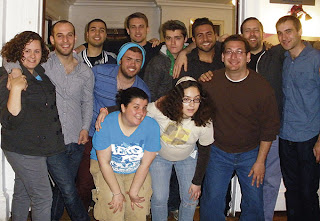 4/24/13 by Debra Rubin- Free to discuss the challenges and joys of being both Jewish and gay or lesbian, college students from across the country gathered at Rutgers University in New Brunswick to share Shabbat and connections.
The 17th annual national leadership conference of NUJLS, the National Union of Jewish Lesbian, Gay, Bisexual, Transgender, Queer, Questioning, and Intersex Students, included religious services, social activities, and frank discussions about activism, spirituality, and coming out to peers and family.
Held April 19-21 under the auspices of Rutgers Hillel, it was the first NUJLS conference to be held at Rutgers.
Among the events was a session on Israel advocacy, conducted by Vinny Foster, a national field organizer for AIPAC, and another on the future of same-sex Jewish marriage conducted by former Rutgers Hillel president Avi Smolen.
While the conference drew only about 20 participants, its intimacy made for unusually strong bonding experiences, said conference chair Max Zandstein, president of Jewish Allies and Queers at Rutgers Hillel.
“I wanted it to be here because this is such a great community at Rutgers,” said Zandstein, a sophomore nursing student from Highland Park. “These events bring together people who wouldn’t normally meet at any other forum.”
A closing session on suicide prevention particularly resonated in the Rutgers community, where a gay first-year student committed suicide more than two years ago after a roommate used a webcam to spy on him and a partner.
That session was led by Samantha Zbik, who identified herself as a University of Delaware senior from central New Jersey. Before speaking to NJJN on April 21, she called her father, who works in Lakewood and has business dealings with its fervently Orthodox community, out of concern it would harm him professionally if it became known there she was a lesbian.
“I go to a school where there is not a lot of queer life, so it was nice to bridge the two worlds here” at the conference, she said. “I went to such a liberal high school I had to take a couple of steps back in college.”
Rich Dweck, a student from Deal attending George Washington University, said he was struck by the tolerance at Rutgers Hillel for the LGBT community, noting that all three of its rabbis, including Orthodox Rabbi Akiva Weiss, had made it a point to stop by various conference activities.
“This is such an accepting environment,” said Dweck, who writes a blog, jewishpinkelephant.com. “It’s a model.”


Devyn, who would not give her last name and would identify herself only as being from central New Jersey, said she didn’t even know there were Orthodox gay and lesbian Jews like her until last year. Dressed modestly in a long skirt, the Middlesex County College sophomore said, “It was extremely important to share a religious experience and meet other Jews like me.”
An April 21 session that presented stories of challenges in LGBT life was led by Joanna Ware, lead organizer and training coordinator for the Boston office of Keshet, which works for full inclusion and acceptance of the LGBT community in Jewish life.
Speaking of “the core sense of physical and emotional safety we deserve to have in the world,” Ware related her own experiences. Depending on the situation, she said, members of the LGBT community have to make the decision “over and over again about whether to come out.”
Jeremy Ginsberg, a sophomore at the University of California at Santa Barbara, said while it was “fabulous” to be gay and Jewish, there were issues to confront on both fronts. However, they were not insurmountable and said gaining acceptance was key.
“We need to show what we are like,” said Ginsberg. “We are here.”
He himself came to the conference because he started a club for gay Jews on his campus and, he said, “I came to get ideas to strengthen my club.”
http://njjewishnews.com/article/17246/gay-students-bridge-worlds-at-rutgers-hillel#.UXqsMqVgJNY