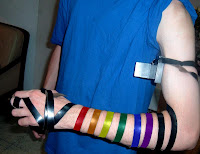 4/5/13- When Hyim Shafner first started working as the campus rabbi for St. Louis Hillel at Washington University in the mid-1990s, he was approached by a male student with an unusual request.
“I’m having trouble meeting guys, rabbi,” Shafner remembers the student saying. “Can you fix me up with a nice Jewish boy?”
Suddenly Shafner’s days at the Orthodox Yeshiva University in New York “felt very far away,” he said.
But moments like that at the university got Shafner, now the rabbi at Bais Abraham Congregation in University City, to begin thinking more seriously about the special problems faced by homosexual Orthodox Jews.
“Jews are not a very big people,” he said. “I think of Judaism as a family, and it’s a shame someone has to leave Orthodoxy — their faith that they value — because they don’t feel like they can find a place in the family.”
As a way to introduce St. Louis’ Orthodox Jewish community to the lesbian, gay, bi-sexual and transgender — or LGBT — community, Bais Abraham and the Jewish Community Center of St. Louis will host a weekend of events April 12 to 14 designed to support Orthodox LGBT Jews.
The event was organized by Eshel, an organization that tries to create understanding for LGBT Jews in traditional Jewish communities. Eshel is bringing in three speakers to discuss what it’s like to be LGBT and Orthodox. The organization has held similar events in New York, Los Angeles and Washington, but next weekend’s event will be the first time it has brought a program like this to the Midwest.
“A lot of people are very curious about this topic,” said Aviva Buck-Yael, a member of Bais Abraham and an Eshel board member. “In most places, we have surprising turn outs. ... They want to know why people wish to stay in the Orthodox community when they’re LGBT. They want to find out how they make that work.”
Orthodox Judaism accepts homosexuals as members of the community as long as they are celibate. But, according to traditional Orthodox rabbis, a sexually active member of the LGBT community would be acting in a way that’s inconsistent with traditional Orthodox practices, and could not properly call himself or herself an Orthodox Jew.
“It’s a hard thing, theologically, for people to deal with,” said Shafner. “But what if someone is born allergic to matzo — it’s the same thing theologically. God commanded them to eat matzo on Passover, but they can’t do it. ... Some Orthodox are driving to synagogue on Saturday, but you don’t find an uproar over that.”

Recent U.S. Supreme Court oral arguments about cases on the Defense of Marriage Act and California’s Proposition 8 have kept same-sex marriage in the news. And polls surrounding the issue continue to show a greater acceptance of same-sex marriage, especially among younger Americans — religious and not.
More than two-thirds of Americans say that gay and lesbian relationships should be accepted by society, while 26 percent disagree, according to a survey last month by the Public Religion Research Institute, or PRRI. But the survey found an even division over whether sex between two adults of the same gender is a sin — 44 percent say it is, 46 percent say it is not.
A Pew poll last month showed how dramatically attitudes have changed over gay issues, even over the last 10 years. In 2003, 58 percent of Americans were opposed to allowing gays and lesbians to marry legally, and 33 percent were in favor. Last month’s survey found that the trends have crossed, with 49 percent supporting same-sex marriage, and 44 percent opposed.
Jewish-Americans seem to be among the strongest supporters of gay issues. According to a PRRI survey last year, more than 80 percent of American Jews support allowing same-sex couples to marry legally, though the survey did not break down its results into Judaism’s different streams. About 1 percent of Missouri’s population in 2011 was Jewish, according to the North American Jewish Data Bank. And about 10 percent of St. Louis’ Jewish population is Orthodox.
Shafner said some Orthodox Jews will inevitably be uncomfortable with next weekend’s programs, “but if people come and listen to the speakers tell their stories of staying with their faith against tremendous odds, they’ll be inspired.”
The Elsha events next weekend begin on Friday night, with a dinner for LGBT Jews (for details emailAviva@eshelonline.org.)
On Saturday, Bais Abraham will host Shabbat services followed by a free lunch and a panel with the three speakers. On Saturday evening, Shafner will host a discussion — “Unity and Diversity in the Jewish Community: Can we have it all?” That will be followed by a screening of a short documentary, “DevOUT” featuring some of the women speaking on the panel. For details call 314-721-3030 or email office@baisabe.com.
At 10 a.m. Sunday, Nishmah — a women’s organization that is a department of the Jewish Community Center — will host the final event. Contact Nishmah at 314-442-3268 for details.
http://www.stltoday.com/lifestyles/faith-and-values/tim-townsend/orthodox-gay-jews-to-gather-and-discuss-challenges-they-face/article_0d8ddc79-1bef-596d-8d84-7a53bd27045d.html