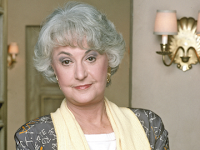 Reddit user BMMiller10 has reason to be very proud of his grandmother after she set a courageous example and left her church for its homophobic teachings:

Posting, just because the story makes me both sad and happy, but most of all, proud of her. :)
I came out to her about a year ago. I’m 20 years old, and she and I have always been very close. She was fairly conservative before I came out, but her relationship with me beat out any religious leanings. She’s been uncomfortable at her church for a few months, because the current pastor is very against LGBT anything.

A kid that attends the church and is in high school is gay, and apparently his parents wrote to the pastor asking what should be done about this. The pastor took the letter the parents wrote, and read it to the entire congregation, outed the kid, and told everyone that they would “work together to address this problem of homosexuality.”

My grandmother stood up at this point, said “There are a lot of problems here, and him being gay is not one of them.” She apologized to the boy, then walked out the door. She just got back from turning in all the stuff she was responsible for for the church’s yard sale and Bible School activities. The pastor is furious at her, but the associate pastor told her that he has a feeling she might be the catalyst, leading a lot of people that are unhappy with things out of the church, and that he himself was uncomfortable, because situations like this are what have led some teens to suicide.

It’s a small thing, and I’m not the best storyteller, but I’m so proud of her, and thought I’d share. :)

It’s “small things” like that which lead to big changes and BMMiller10 is certainly lucky to have a nana who’ll not only stand up for him, but for others and what she believes in.