"Ed Koch and the Politics of the Closet"- The New Yorker 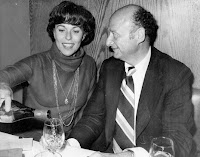 2-2-13 The New Yorker: Ed Koch, whose brashness and authenticity about almost anything and everything came to define New York City in the seventies and eighties, would for the most part tell people who asked about his sexual orientation that it was none of their business, although it was clear that he was trying to give the impression that he was heterosexual—at least for most of his life. One of the many remarkable things about the Ed Koch story is that this highly successful public figure known for his transparency of opinion—that is what made him Ed Koch—felt the need to be so opaque on this one subject. And that spoke volumes.

There are now hundreds of openly gay elected officials in the United States and over a thousand around the world. This past November, voters elected a record number of openly gay or bisexual members of Congress (six) and the very first member of the U.S. Senate, Tammy Baldwin. But when Ed Koch first ran for public office, for Congress in 1968, there were none.

I grew up in New York City, and while I was in high school and college Ed Koch was my local congressman. In 1977, during my first year of law school, as I struggled with the question of whether I could ever run for public office and still be honest about my sexual orientation, Koch was elected mayor. I decided that I could not; it mattered to me that there weren’t any prominent gay role models that I knew of who were successfully navigating this terrain. Or at least not enough of them to convince me that I could do it, too, or that it was worth the risk.

It wasn’t until the mid-seventies, when out lesbian Elaine Noble was first elected to the Massachusetts state legislature, and later, in 1978, when Harvey Milk was first elected to the board of supervisors in San Francisco that we had any gay elected-official role models at all. (And Milk was murdered that same year.) It wasn’t until 1983 that we had an openly gay member of Congress, and that only happened because Congressman Gerry Studds was forced to come out of the closet after he admitted an affair with a congressional page. Congressman Barney Frank came out in 1987. (In 1993, I joined the Clinton Administration in an appointed post.)

When Ed Koch was beginning his political career, it was a different era. When he first ran for mayor, for example, the suggestion was that he was having a romantic affair with his friend Bess Myerson, a former Miss America, who had served as the city’s Commissioner of Consumer Affairs. Later in life, especially after he left office, the impression he gave was that it was just none of anyone’s business. There was less of an effort to suggest that he was heterosexual. It wasn’t so much that the words he used were different, but the nuanced impression he was trying to give had changed.

But make no mistake about it. It would have made a world of difference to a whole generation of young people—young aspiring gay and lesbian political people—for there to have been a role model as big and successful as Ed Koch.

Many believe that he was reluctant to aggressively address the AIDS crisis for fear of being identified as gay. He certainly moved way too slowly, especially given that New York was the epicenter of the virus, though not more slowly than many other elected officials.
He maintained that people shouldn’t be interested in his sex life, but seemed to have no appreciation, or tried to intentionally obfuscate, the idea that sexual orientation is only partially about sex. He had to have known that his status as a “lifelong bachelor,” to many people of his era, meant that he was a closeted homosexual.

One way or the other, many gay people are still angry at him over his unwillingness to say if he was gay. But if it was true, I would suggest sympathy rather than derision. How difficult it must have been, to maintain that kind of a secret for so long and in the context of such a public life.

Coming out is an intensely personal decision and a very difficult experience for many, especially for those in public life. We saw this most recently with Jodie Foster’s remarks at the Golden Globe awards. Ed Koch probably thought he was doing us a favor by making the case that who he—or anyone else—slept with had nothing to do with his ability to do his job. What he missed is that, had he lived in a different era, or had he had the courage to overcome the era in which he lived and its prejudices, he could have done enormous good in this arena, even later in his life, when there were no more elections to win.

Others have stepped forward, times have changed, and the city has a new generation of leaders. In the year in which we now mourn our former mayor, the front runner for his old job is City Council Speaker Christine Quinn, a proud open lesbian with much the same brashness and authenticity about her that we cherished in him.


"Ed Koch and the Politics of the Closet"- The New Yorker