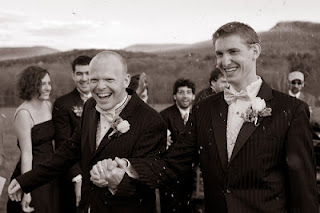 As the Supreme Court gears up to hear arguments on the legality of same-sex marriage, a new study suggests such unions may boost mental health.
Gay, lesbian, and bisexual people who are married have significantly lower levels of psychological distress when compared to their non-married counterparts, according to a study published today in the American Journal of Public Health.
“One one level, it’s not surprising,” said study author Allen LeBlanc, a professor of sociology at San Francisco State University. “We know that heterosexual marriage provides a higher perception of social integration and support. It makes sense that same-sex marriages would carry some of the same benefits.”
The data comes from the 2009 California Health Interview Survey, which includes data from more than 47,000 hetero- and homosexual men and women, ages 18 to 70. Participants were asked about psychosocial distress, legal relationship status, education and employment status, and self-perceived overall health.
How about: The study found that psychological distress was not significantly distinguishable among people in legally recognized same-sex or heterosexual relationships.  There were, however, big differences in well-being between gay, lesbian, and bisexual men and women who were married and those who were not in any sort of legally recognized union.
The Supreme Court announced Friday that it would reassess the legality of two significant anti-gay-marriage laws — California’s Proposition 8 and the Federal Defense of Marriage Act.
“[The laws] were not designed to harm mental health among LGBs [lesbian, gay and bisexual people], but it appears that such policies may indeed harm sexual minority populations,” said LeBlanc.
LeBlanc said more research is needed to determine whether individuals’ well-being increases when their kind of relationship gets legal backing.
He also said marriage is significantly protective against distress in heterosexual couples as well.
“The social environment of our lives affects well-being for everyone,” he said.