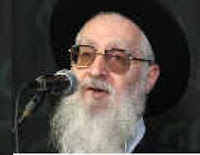 12/18/12- Pinknews.co.uk: A prominent Rabbi has said that people seeking private lessons, especially for their children, are not allowed to employ “perverted” gay teachers, “evil” atheists.

Rabbi Ya’akov Yosef, rabbi and former politician, made a halachic ruling which prohibits taking private lessons with any teacher who is gay, reported Arutz Sheva. He said: “If the teacher lives a perverted lifestyle, what is vernacularly called a homosexual, one must be very careful when studying with such a person.”

The ruling was made in response to a question asked to him by a website representing “religious Orthodox homosexuals,” regarding taking piano lessons from a gay teacher.

The ruling will mainly apply to non-Jewish people who are openly gay. It quoted Rabbinic literature going back to the Talmud, the central text of Rabbinic Judaism, as well as other rabbis, which prohibited males from conducting meetings with gay people.

It also states that it is forbidden to share lodgings with gay people. He wrote: “We are not concerned about this matter when it comes to two Jews, but in the case of non-Jewish homosexuals we must be concerned.

“Many times a father will want his son to learn to play the piano, or another instrument. Perhaps the only teacher available is an Arab, and the father hires him as a private tutor. But we suspect them of this kind of behavior and we cannot endanger our children in this manner,” he said.

The ruling was extended by Rabbi Yosef, to ban private meetings between children and Jewish people who are openly gay, or meetings between children and Jewish people accused of pedophilia.
“When we say that Jews are not suspected of this behavior, we are talking about the average person. But as soon as suspicions have cropped up regarding someone, we must be very careful. This applies to households, and even more so for principals, who cannot hire these people for teaching positions.

“This applies even if the person was not convicted of a crime and did not serve time in prison for these crimes. The fact that there are questions about his behavior is enough,” Rabbi Yosef added. “There is no smoke without fire.”

He also said it is forbidden to employ “declared atheists”, as they do not respect Jewish teachings.

“These people are considered evil, since as they teach the child they add their disrespect for Judaism. The solution in this case is to supervise the teacher,” Rabbi Yosef wrote. “You wish to hire such a person as a tutor? He must teach your child in your home, where he will fear to spread his ideas. You are not permitted to send your child to his house.”