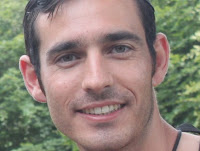 A Wider Bridge- December 4th, 2012: My name is Daniel Jonas. I’m 30 years old, born and raised in Jerusalem, Masters-degree student in the History of the Israeli People at the Hebrew University. I’m an observant Jew, and gay.

Since the fourth grade, kids at school shouted at me, in class and in the halls, this word: ‘Homo.’ I don’t think I quite understood what it meant back than, and I’m not sure they understood it, but it was pretty clear for everyone that “homo” was a word of denigration.
The emotional difficulty became stronger when I fell in love with another kid in class in the 8th grade. The confusion and loneliness that I felt became stronger and stronger, as I kept thinking I couldn’t share these feelings with anyone.

And then I started thinking about suicide in the 9th grade. Up until today I see it as a miracle, but one day I was invited by the social worker at school for a talk. I was there for five hours, trying hard not to reveal my big secret about committing suicide and even more my sexual orientation.

Then she talked with my parents, and an hour afterward I found myself in a mental help center for teenagers, and met a psychologist the same evening. The psychologist was the first person I told about my sexual orientation and he immediately calmed me down, saying: “Don’t worry, it will pass” (or at least this is what I wanted to hear from him). I stopped worrying, I believed it would pass.
A few years later, after I finished  high school,  I went to a Yeshiva in Atniel. I had never been surrounded with men in such an intensive way, since I grew up in a family that embraced equality and went to school that included pupils of both genders. There, in the Yeshiva, is where I realized that it hadn’t “passed”, just repressed.
Among the 90 class members in the Yeshiva, I spotted a charming and God-fearing guy, and soon enough I understood that I was beginning to fall in love. I tried to avoid this guy as much as possible but at the same time I realized that my 9th grade psychologist was wrong. I didn’t want to reach that same dark spot of loneliness and wanting to die, so this time around I decided to come out to my best friend there, even though I feared he’d turn his back on me and tell everyone.
One night I took him to the darkest spot in this settlement at the foot of Hevron Mountain, and told him: “I think… maybe I’m gay.” To my surprise, he hugged me. That was the first time I understood that maybe I’m okay after all. He recommended that I should go and see a very well- known rabbi. The rabbi told me that my “problem” was a result of two things: first of all, my father didn’t love me enough, and therefore I should demand more love from him, and second, that I had never had sexual relations with a girl, and therefore I didn’t have any fantasy to hold on to. So I decided to try.
A few years later, after I started at the university, I went to study a for a year in Amsterdam. There, thousands of miles from home, I found time to dig deeper into myself in peace, and realized that the feelings I feel are deeper than an urge for sex, and these feelings are part of my soul that I can’t extract.  I decided that when I came back to Israel I would share these feelings with my parents. A week before I was scheduled to come back to Israel, in June 2009, it was the gay-pride parade in Amsterdam. The colorful and beautiful parade that every year presents people from all genders, colors and races in The Netherlands, passed by my window, and the veriaty of people that participated in it- from Muslim women with veils to cops and pastors, gave me a sense of belonging and a strength that I had never felt before.
And then everything was cut off. It was that same night, that same Saturday evening, when two people were killed and dozens were injured during the attack on the Bar Noar in Tel Aviv. That same moment I realized that it’s not enough to tell my parents, and it’s not enough that my friends accept me the way I am. I can’t shut up any more.
I came back to Israel in full motivation to do something, to help my fellow closeted women and men. I published my first column, with my full real name, where I called them to come out. Two hours later I was approached by a man I never knew before, Benny Elbaz, who, with the help of Nati Epstein, opened a group of religious gays called ‘Hevruta’, and approached me to come on board.
Today I manage to have a gay life while not giving up on my religion. I also didn’t give up on my desire to have a family. I’ve lived almost two years with my partner Uri, and we keep a very close relationship with our families, and go to spend Shabbat with them every other week.
I hope that gays and lesbians who are growing up nowadays in the orthodox and secular communities will see hope in my story, and realize they are not alone. You don’t have to give up on any side of your identity. I want to say that a life of truth is a better life.
http://awiderbridge.org/observant-jew-and-gay/