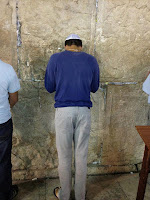 In the Torah, or Old Testament, the word abomination is used sixty-seven times. An explicit line in Leviticus 20:13 states, “If a man lies with a man as he lie with a woman, both of them have committed an abomination.”  Abomination is a powerful word, which implies that homosexuality is sinful and unnatural.

But another passage in Deuteronomy 22:5 reads, “The woman shall not wear that which pertaineth unto a man, neither shall a man put on a woman’s garment: for all that do so are abomination unto the Lord thy God.”

The use of the word in this context minimizes its impact and saturates its meaning. Juxtaposing the Leviticus and Deuteronomy passage reveals that the bible would equate homosexuality with a woman wearing pants (considered a male garment), something most female Jews are allowed to do today. Still, prominent religious figures cite Leviticus 20:13 almost every time they are forced to defend their anti-queer positions.

These homophobic messages imbedded in religious discourse, both clear and hidden, trigger an internal struggle in LGBTQ Jews. Internalized homophobia manifests in Jews who are exposed to environments and philosophies contradicting their sexual feelings, pressuring them to choose between their sexuality and religious identity. Modifying the interpretations of religious text publicized by Orthodox scholars and creating inclusive environments for LGBTQ Jews in religious community settings can alleviate the internalized homophobia perpetuated in these individuals, allowing for reconciliation between queer and Jewish identities.

Rabbis and Jewish scholars are constantly analyzing, interpreting and discussing passages in the Bible. The halachot, or Jewish laws, derived from the Talmud, or Oral Torah, are sometimes redefined to suit modern times. Orthodox Judaism, however, takes a more literal approach to religious text, and believes that Jewish law is static and binding. The Bible is filled with sexist assertions: Deuteronomy 22:23-24 essentially says that if a woman is being raped and she does not “cry out loud”, it means that she most likely enjoyed it and should be put to death.

Though this law is no longer applicable in modern times, sexist and homophobic dogma persists in the interpretation of the Bible, making it arduous to adjust the moral positions of influential Orthodox figures. Closer looks at frequently cited texts maintaining an anti-LGBTQ sentiment, however, reveal a possibility of misinterpretation.

When discovering how often abomination is used in the Bible and the frequency it appears in inconsequential matters, the word begins to lose its authority. But a deeper analysis of the word and its definition reveal another startling uncovering. Jay Michaelson claims that the word abomination has been mistranslated from the Hebrew word toevah. He writes, “This is a thoroughly misleading rendition of the word toevah… a close reading of the term toevah suggests an entirely different meaning: something permitted to one group, and forbidden to another…toevah means taboo”.

The mistranslation of the word toevah further alters its intendment. Taboo is drastically different than the word abomination. The connotations attached to “abomination” (disgrace, horror, shame, detestation) are much stronger than those associated with “taboo” (banned, restricted, illegal).

The degree in which Leviticus 20:13 is used to support anti-queer demeanor by Orthodox Jews instills a horrific image of self in the minds of Jews with homosexual feelings. In “Why Gay Jews Feel Alienated”, David Forman writes about how his college roommate tragically committed suicide after a long struggle, affected by “the word ‘abomination’ [which was] a totally inappropriate appellation for my roommate”. He continues to write, “For Jews, our legal restrictions are so extreme on the matter of homosexuality that the gay individual is virtually confined to a sub-human status”.

Orthodox leaders fail to realize that their proclamations of either ignoring or eradicating the queer from the Jewish world carry deathly implications. The internalized homophobia that is implanted in Jewish youth struggling with their sexuality is a direct result of greatly fallacious religious dialogue.

People in Orthodox communities are led to believe that their “immoral” attractions and thoughts are sins to be avoided and eradicated. The first openly gay Orthodox Rabbi and author of “The Cost of Standing Idly By”, published in the New York Jewish Week, shares his struggle finding acceptance in his local Orthodox community. Upon moving to Cincinnati with his partner, he is prohibited from attending the local Orthodox synagogue.

He called the Rabbi of the synagogue in attempt to change his views, explaining that “people who are gay and lesbian who want to remain true to the Torah are in a great deal of pain…many have just left the community…some young gay people become so desperate they attempt suicide”. The Rabbi’s reply: “‘maybe it’s a mitzvah for them to do so’” (mitzvah is defined as a good deed done from religious duty). The malevolence and cruelty of these words by a leader in the Orthodox movement reveals a deep-rooted mindset ingrained in the minds of many of their forerunners.

This is not to say that this is the stance of every Orthodox Rabbi; however, whether they acknowledge it or not, their words have the power to take an individual’s life. If Jews cannot feel comfortable in public environments such as the synagogue because of their sexuality, how can they be expected to be happy in their personal lives? Based on this evidence, a movement to create inclusive communities for Jews, regardless of religious denomination, must clearly be undertaken.

Community belonging within a religious denomination is a significant component of Jewish culture. One’s location within the Jewish world is a large part of that person’s identity. There is still, however, a greater sense of belonging to the Jewish community as a whole. According to Martin Manalansan, “community is not defined as a static, closed and unified system,” but rather, “as a fluid movement between subjectivity/identity and collective action”. In this sense, one’s location within a religious denomination should not deter their relationships with the larger Jewish community.

A declaration of anti-queer position by Orthodox institutions sends ripples throughout every other denomination. Although there is a stirring movement in Conservative and Reform Jewish communities to accept LGBTQ Jews, the Orthodox community is far from acceptance and inclusion. In fact, movements to “cure” homosexuality in Orthodox communities have been incited in response to more Orthodox Jews coming out as queer.

JONAH International, which stands for Jews Offering New Alternatives to Homosexuality, is a controversial organization that attempts to cure its members of their evil homosexual behaviors. Establishments such as JONAH, supplemented by religious discourse, are damaging the patients they aim to cure.

In 2007, the American Psychological Association studied the efficiency of ex-gay therapy. “[APA] concluded that there was scant evidence that sexual orientation could be changed…it found that attempting to do so could cause depression and suicidal tendencies among patients,” and, “based on these findings, in 2009 the APA voted to repudiate reparative therapy by a margin of 125 to 4,”.

Ex-gay therapy is an alarming example of how Orthodox leaders are further ostracizing Jewish queers from their communities. But more importantly, as a self-identified Jewish queer, I find myself further drawn away from Judaism as a whole when learning of establishments such as JONAH.

How can I proudly declare my Jewish identity when I know religious LGBTQ Jews are being oppressed in Orthodox communities? In order to solve an increasing disassociation of queer Jews from the religion, efforts to eliminate establishments like JONAH are needed. Furthermore, intolerance to Orthodox queers in religious communities preserves the negative sense of self in the mind of many, which can result in heartbreaking consequences, evident by the examples David Forman and Rabbi Steven Greenburg shared in their writings.

Tough critique of religious Jewish text should not prompt disassociation by queers from their Jewish communities. On the contrary, it should instigate a movement of reconciliation between the seemingly contradicting identities. More importantly, resolution can remedy the internalized homophobia that is dangerous to ignore. By urging a reinterpretation of the religious text used to support the moral positions of Jewish leaders and establishments, the internal conflict within LGBTQ Jews can be alleviated.

Jay Michaleson says in a speech about his book God vs. Gay, “Religious people should support equality not despite religion, but in spite of religion,” and a reinterpretation of text reveals that a dichotomy between sexuality and religion should not exist. Amongst the few misinterpreted texts used against Jewish queers, there are countless passages that unmistakably support acceptance and equality among all people.

Leviticus 19:18-19 reads, “Thou shalt not go up and down as a talebearer among thy people; neither shalt thou stand idly by the blood of thy neighbor: Thou shalt not hate thy brother in thy heart”. An earnest interpretation of this passage overshadows the hateful misreading of Leviticus 20:13. Positive messages of love and acceptance, like those found in Leviticus 19, should replace religious text used to maintain hate and intolerance. Only then can the self-loathing in LGBTQ Jews be replaced with pride.

Today, I proudly identify as a queer Jew. The journey to accept myself, though, was both difficult and rewarding. I, too, struggled with internalized homophobia that was a result of the conflicting messages I received from my Jewish upbringing. Though I am fortunate to have endured minimal neglect and bigotry from close people in the Jewish communities I have belonged to, I was often my toughest critic.

What many religious Jews fail to realize is that neglect alone has the power to severely damage an individual. I did not have to be ridiculed or ostracized from the Jewish communities I was a part of in order to hate myself. It was as simple as knowing that the actions I take and the characteristics I embody would always be masked by a stigma, following me with every step.

Inside, I gave up on Judaism as a religious identity (though I still kept a strong cultural tie) and embraced my queerness. But everything changed in college. I began volunteering at Hillel, a Jewish club and religious center on campus, while simultaneously interning at UCSB Associated Students, Queer Commission. Without even recognizing it, I was beginning to tie together my ostensibly opposing identities.

Through my work at these organizations, I was presented an opportunity to attend a conference in Washington DC called the National Union of Jewish LGBTQ Students (NUJLS). Through the people I met and the workshops I attended, I realized that the dichotomy between queer and Jewish identities could be resolved. Although this is a recent epiphany, I am already taking positive strides towards fostering self-acceptance while inspiring other LGBTQ Jews to begin doing the same.

I am currently in the process of creating a Queer Jewish organization on campus called Keshet, which is Hebrew for rainbow. By clearing the heteronormative and literal lens Orthodox Rabbis use to study religious text and reconstructing religious Jewish environments to openly welcome LGBTQ Jews, my hope for a unified queer and Jewish identity can be actualized. Today, I proudly identify as a Queer Jew. My journey, though, has just begun.

And I hope that by starting to share my feelings on this blog, I will help others fight for a more inclusive, accepting and safe world, regardless of race, gender, sexuality, religion, etc.
Not Your Average Contradiction blog by Andrew Farkash