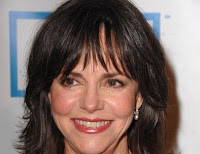 Sally Field, beloved for her roles in films like Places in the Heart, Steel Magnolias, and Norma Rae, talked about being the proud mom to a gay son as she accepted the Human Rights Campaign's Ally for Equality Award on Saturday in Washington, D.C.
The actress discussed how her youngest son Sam, who introduced his mother at the event, was different from his two older brothers and how she supported Sam on his journey to come out, which he did at age 20.
"Nature made Sam, it wasn't a choice," Field said. After sharing her own experiences with Sam, Field said it was unacceptable for parents to toss LGBT kids out of their homes or hearts. She also thanked the audience and said, "You all have fought for him as surely as you were one of his parents. You've changed and are changing the lives of little boys and girls who realized somewhere along the way they're just different from their other brothers and sisters. And so the fuck what." Watch the entire speech below