"Twice Blessed: Being Gay and Jewish" by Dr. Joe Kort 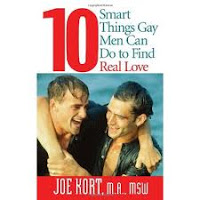 Words can hurt. Verbal and psychological abuse can be harder to recover from than actual physical violence in the sense that when physically harmed you are taken seriously and people believe you. When it is verbal and covert people tend to blow it off and minimize it. The fact that nothing is done after any type of abuse -- verbal or otherwise -- is a secondary trauma and can be worse than the actual words.
I am intrigued that a Canadian university is looking at casual homophobia on the Internet and citing the number of times anti-gay terms are being used daily, weekly and yearly on Twitter. Their intent is to show the damage done by these anti-gay words being used.
The last two weeks were the high holy Jewish days Rosh Hashanah and Yom Kippur -- the Jewish New Year and day of atonement. I reflected on my being Jewish and having been raised in a culture where everyone in my family was Jewish and honored me and validated me for being one too.
I knew of the concept growing up but never actually suffered from direct acts of it. I knew epithets like "Jew boy, "kike," and "Jew them down" existed but never had any of these words or phrases directed to me personally.
I was raised in Oak Park, Michigan in the 1970s when it was predominately Jewish. My mother wanted us to be raised in a nice Jewish neighborhood and to be surrounded by "sameness."
I worked at a grocery store, and every holiday season both Christmas and Chanukah decorations were displayed. It seemed equitable. I believed at the time that the whole world was like that.
Equal opportunity. We had a token "non-Jewish" friend in my social circle, a guy who found it endearing to be part of the group. I had plenty of opportunities to see other Jewish role models. Even as Oak Park began to become integrated, I still had a lot of contact with many other Jewish people.
I was first faced with being a minority in college, where I was the only Jew in a new social group. There were no menorahs displayed during the Christmas/Chanukah season, only Christmas trees. Even so, people were sensitive to the fact that I was a minority and endearingly referred to me as the "token Jew."
My friends and acquaintances were careful about what they said about Jews and asked me a lot of questions.

For the first time, I felt different. I knew the difference between being in the minority and being in the majority. But I also knew it on a deeper, more secretive level.
When growing up, I heard names like "faggot," "sissy," "pansy," "queer," "momma's boy," and "homo." Not only did I hear these terms in reference to others, I was called these things throughout my life.
I have not received the same respect for my minority status as a gay male as I have for being a Jewish male.
Although I knew the term for fear and hatred of Jews was anti-Semitism, I did not know there was a parallel term for gays and lesbians: homophobia. I prefer the word homo-prejudice because it really is more about hatred and contempt than it is about any type of fear or phobia.
Homophobia is defined as the fear, disgust and hatred of sexual love for members of one's own sex. It is a prejudice based on a personal belief that lesbians and gays are immoral, sick, sinful or inferior to heterosexuals.
Although I know some non-Jewish people in society feel this way about Jews, I have never encountered this fear, disgust and hate as a Jew to the extent I have as a gay person.
I did not follow the typical male patterns of most boys growing up. I could not throw a ball, I liked to play house and I disliked all sports. I was told by the other boys my age (as well as adults) that I "acted like a girl" and must be gay. It just so happened that I was gay and was mortified that I had been exposed.
At least as a Jew I could have turned to my family, friends or school if I had experienced an anti-Semitic attack. But as a little gay boy, I had nowhere to turn. I was bullied, spit at, punched, called names, humiliated and threatened. The schools did nothing to protect me.
My sixth-grade gym teacher told my classmates that my best friend and I must be "fags" because we spent so much time together.
I have an uncle who teased and taunted me, calling me a "little sissy girl." He told me I would never grow up to be a man.
He was right in that I was a "sissy" by definition. But why was that so unacceptable? My sister was a tomboy and no one made fun of her.
After hearing all these derogatory remarks about gays and lesbians, is it any wonder that no one wants to be associated with or be seen as a gay or lesbian? There is more support to hate gays and lesbians than there is to love, accept or tolerate us.
Little boys like me who do not follow the typical male patterns are labeled gay, when in fact, they might not be. They get harassed often just as I was. Men are touch deprived by other men for fear of being seen as gay.
As an adult male, I still do not enjoy sports of any kind. I affectionately touch other men and I still lovingly kiss my father on the lips when we greet each other. And I am gay.
I am every bit a man. I think however, that what people did to me was tragic as much as it is to any other little boy or girl. As a gay little boy and young man, I was not protected and felt very much alone.
Unfortunately, an extreme form of hate also exists, and that is death. Acts of violence toward gays and lesbians are tolerated and overlooked in this society. The recent media light on gay teen suicides is showing that things have not gotten better for children and teens before they come out. Having to listen to anti-gay rhetoric day in and day out and have nothing be done about it is cruel and horrifying and the psychological suffering is brutal.
While there are anti-Semitic and homo-prejudice people in this world who might see me as twice cursed, I see myself as twice blessed.
I am proud to be a gay Jewish man.
http://www.huffingtonpost.com/joe-kort-phd/gay-jewish-_b_1922669.html