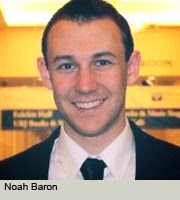 Huffington Post
By the time I reached my senior year of college, I'd had my life plan for about a decade already: go to college, major in political science, go to law school, get involved with politics. This, I thought, was the best way for me to make the world a better place. Although I had some minor deviations from that path (coming out of the closet was originally not part of the plan for me), the whole thing was largely intact. But as I began preparing to apply to law school, I began wondering: what if I don't want to be a lawyer? What if I want to do something else? What if I do good in other ways? What if I want to become a rabbi?
I was (and am) passionate about my faith, I enjoyed Jewish learning and theological discussions and thought that perhaps the rabbinate would be a better way to make a difference. The rabbi and the rabbinical intern at my university Hillel both encouraged me to apply to rabbinical school.
But when I began looking into the Reform and Reconstructionist rabbinical colleges, I discovered a barrier I hadn't imagined would be a problem: I would have to sign a statement affirming that I would not be in an interfaith relationship at the time of my ordination. Although I was in an interfaith relationship at the time, that requirement would have been as offensive to me if I had not been.
Some friends suggested that I should sign the statement anyway, and keep my relationship a secret. "It's not uncommon," a friend at Hebrew Union College, the Reform rabbinical school, informed me. But I had already spent 16 years in the closet as a gay man -- I was not keen on going back.
As upset as I was, however, I wanted to know why they would want me to sign such a statement, especially when no other such promises were required on any other subject for ordination! Moreover, both the Reform and Reconstructionist movements appeared to have no problem with having interfaith families in their congregations. But apparently, neither thought it acceptable for someone in an interfaith relationship to serve those congregations as a rabbi. I brought the subject up with other members of the Hillel community to hear what they thought could be the reasoning behind the rule.

Someone told me that not having a Jewish significant other might be a sign of a lack of one's commitment to Judaism. But, I pointed out, I had a non-Jewish significant other. Despite my secular upbringing, at 13 I decided to have a bar mitzvah. I spent three years as a leader of my university's Jewish community, organizing and leading services, and giving d'vars (sermons), and I spent this past year working for the Reform movement as an advocate in Washington, D.C. Despite my hectic law school schedule, I study Torah on a weekly basis, and I attend services regularly. Was I -- am I -- really less committed to my Judaism than all -- or even many -- of the people who do have Jewish significant others?
Another person said that rabbis are supposed to be role models, implying, I suppose, that someone who is dating a non-Jew cannot be a good Jewish role model. The idea that there is necessarily something wrong with or un-Jewish about interfaith relationships strikes me as fundamentally backwards. I had thought that, with the acceptance of lesbians, gays and bisexuals into congregations and the rabbinate, the judgment of individuals on the basis of who they love, rather than on the basis of their character, their intelligence, and their capabilities, would be a thing of the past. This is apparently not the case.
On its website, the Reform movement boasts:

For over 30 years, Reform Judaism been committed to welcoming interfaith couples into our community. Interfaith issues impact entire families. Grandparents, parents and children all face challenges posed by differing religions and cultures. The most important thing to remember is that you are not alone. We are here to serve as a resource for you and your extended family.
If you are a member of an interfaith couple or family, we invite you to find a spiritual connection in a Reform congregation. Remember that Reform congregations warmly welcome interfaith families!

This is a question that the Reform movement will have to continue to struggle with until it opens the rabbinate to all qualified, ethical people. Its current prohibition against those in interfaith relationships entering the rabbinate is fundamentally at odds with the traditional Reform commitment to equality and fairness -- not to mention its promises of welcoming interfaith families. While I will likely never become a rabbi -- at least in part because of this rule -- it is my hope that the option will be open to those like myself who come after me.
http://www.huffingtonpost.com/noah-baron/the-jewish-interfaith-problem_b_1372568.html?view=print&comm_ref=false