Study: No difference in development of foster kids adopted by gay or straight parents 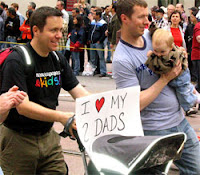 High-risk children adopted from foster care by gay parents fare equally in their cognitive and emotional development as those adopted by heterosexual parents, according to a new UCLA study published in the October issue of the American Journal of Orthopsychiatry.
The study is the first to compare children who were adopted out of foster care by gay men, lesbians, and heterosexual couples, and to track their progress over time, said lead author Justin Lavner, a doctoral candidate at UCLA.
The researchers followed 82 children in Los Angeles County -- 22 of whom were adopted by gay parents at the average age of 4 -- and evaluated them after two months, one year, and two years after they were placed with their adoptive families.
According to the study, children in both household types showed significant gains in cognitive development and maintained similar levels of behavior problems over time, even though the children adopted by gay parents often had more risk factors than those adopted by heterosexual parents:

The children had multiple risk factors at the time of adoption, including premature birth, prenatal substance exposure, abuse or neglect, and multiple prior placements. The psychologists acquired information regarding these biological and environmental risk factors from birth records, court reports and Los Angeles County Department of Children and FamilyServices records.
The children adopted by gay and lesbian families had more risk factors at the time of their placement; out of nine risk factors, they averaged one additional risk factor, compared with the children adopted by heterosexual parents.
"The children adopted by gay and lesbian parents had more challenges before they were adopted and yet they end up in the same place, which is impressive," said Letitia Anne Peplau, a distinguished research professor of psychology at UCLA and co-author of the study.
The U.S. Department of Health and Human Services reports there are currently 104,000 foster children in the U.S. available for adoption.
In summary, the study indicates that gay and lesbian parents can provide nurturing homes for these children in a manner similar to that of heterosexual parents.
"There is no scientific basis to discriminate against gay and lesbian parents," said Peplau.
A 2007 study by the Urban Institute and the Williams Institute at the UCLA School of Law estimated there were a potential 2 million gay couples interested in adoption, but that they are less likely to pursue it due to discrimination against gay parents.
Only 19 states and the District of Columbia currently allow gay couples to adopt.