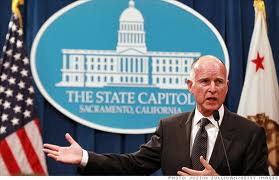 California has become the first state in the country to ban controversial therapy practices that attempt to change the sexual orientation of minors after Gov. Jerry Brown signed a bill to outlaw them Saturday.
The bill, SB1172 by Sen. Ted Lieu, D-Torrance (Los Angeles County), bars mental health practitioners from performing so-called reparative therapy, which professional psychological organizations have said may cause harm. Gay rights groups have labeled them dangerous and abusive.
"This bill bans non-scientific 'therapies' that have driven young people to depression and suicide. These practices have no basis in science or medicine and they will now be relegated to the dustbin of quackery," Brown said in a statement to The Chronicle.
Brown approved the ban after the public release of two other lists of bills signed and vetoed earlier Saturday. Lieu's bill is expected to appear on a new list to be released Sunday.
The signing came as Brown nears his Sunday night deadline to consider legislation on his desk. Among the bills vetoed was one that would have barred public transit agencies like BART from shutting off cell phone service in its stations without a court order.

National gay rights organizations had been lobbying the governor intensely to sign the therapy ban. The Human Rights Campaign, the nation's largest lesbian, gay, bisexual and transgender rights organization, sent Brown a petition with nearly 50,000 signatures urging him to approve the measure.
"LGBT youth will now be protected from a practice that has not only been debunked as junk science, but has been proven to have drastically negative effects on their well-being. We commend Gov. Brown for putting children first, and call on all states to take California's lead on this issue," said Chad Griffin, president of the Human Rights Campaign.

Under the new law, which will take effect Jan. 1, no mental health provider will be able to provide therapy that seeks "to change behaviors or gender expressions, or to eliminate or reduce sexual or romantic attractions or feelings toward individuals of the same sex."
Mental health professionals who violate the law, which applies to therapy for patients younger than 18, will be subject to discipline by whatever group licenses them.
The therapy often starts from the premise that a person's childhood and parental upbringing has somehow left that person deficient and thus has led him or her to same-sex attractions. Practitioners often are religious, and gay rights groups have derisively characterized the therapy as an attempt to "pray away the gay."

Other significant actions taken by the governor Saturday came from his vetoes.
Brown rejected a bill that would have stopped BART and other government agencies in the state from shutting down cellular phone networks without obtaining a court order. The bill had sailed through the Legislature with unanimous bipartisan support.
The measure, SB1160 by Sen. Alex Padilla, D-Pacoima (Los Angeles County), came in response to the controversial decision by BART officials to shut down underground cell service at San Francisco stations in August 2011 in an attempt to disrupt a protest over the killing of a man by a BART police officer.
In his veto message, the governor wrote that the determinations required by the bill "must be made by officers engaged in conflict" and could divert their attention away from quickly and safely resolving the incident.
Brown encouraged Padilla to work with law enforcement agencies to come up with another bill next year that "balances the protection of free speech with the ability of law enforcement to utilize this tool in the protection of public health and safety."

The governor also vetoed a number of bills that would, in part, have resurrected the redevelopment system used by cities and counties that was eliminated as part of last year's budget debate.
"This measure would likely cause cities to focus their efforts on using the new tools provided by the measure instead of winding down redevelopment," the governor wrote in his veto of AB2144 by Assembly Speaker John Pérez, D-Los Angeles. "This would prevent the state from achieving the general fund savings assumed in this year's budget."
On Friday, the Department of Finance reported that the state had so far come in significantly below what was anticipated in savings from the statewide elimination of redevelopment agencies, coming up hundreds of millions of dollars short of what was assumed in Brown's budget.
Read more: http://www.sfgate.com/news/article/State-bans-gay-repair-therapy-for-minors-3906032.php#ixzz27y4xa12k