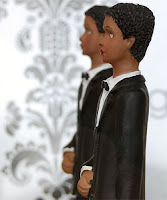 The pair, named as Mark Jiminez and Beau Chandler, were protesting the state’s ban on marriage equality.
They went to the clerk’s office on Thursday to file for a marriage licence while supporters and TV camera crews waited outside.
When it was denied, they sat on the floor and handcuffed themselves together. Police eventually led them out of the building.
The Dallas Voice reports that local police officers were friendly to the couple, with one advising them to “have a full belly” before starting the protest.
Sr. Cpl. Laura Martin, LGBT liaison officer for the Dallas Police Department, said: “They’re the nicest couple. They’re the first guys after any protest to come up and thank the officers.”
It is not clear what punishment they will face.