This is such an amazing breakthrough. A group that I am proud to call myself a member of, JQY marched along with a bunch of other Jewish LGBT Orgs. If only the men that passed away from Aids in the 80's and 90's were able to see this. Sometimes, I think about what it was like for them. They had no idea what was going on, no treatments and most didn't even know how it was spread. The religious right said it was God's way of punishing the sinful homosexuals.
Growing up in the 80's myself, I remember my mom coming home and telling us that the guy who always washed her hair at the salon died of Aids. She was terrified. People still didn't know what it was from. All they knew what that it was mostly amongst the Gay community.
Years later, I heard of individual cases of Syrian Gay Jewish Men that passed away from Aids. I wonder who was there for them. People were told that they passed away from "Cancer". People don't talk about these people and they are pretty much forgotten.
What if those people lived today, how would they feel about themselves and others around them? Would they have chosen to get married, be involved in LGBT rights and marched at the Israeli Day Parade yesterday.
Rabbi Besser of the Yeshiva of Flatbush High School made a speech at a shabbaton 15+ years ago and I still remember it. He said, I went to a funeral and a wedding a few days ago. He said seeing such sadness and such happiness in the same day made him think. I will try and quote him based on my memory. "If we don't have sadness, how can we truly experience joy. We were given both emotions for a reason, and one enhances the other. Being able to cry and then laugh is a gift from God." So in this joyful moment, I remember those that have passed before us.  Rich Dweck 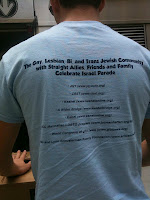