The black Jewish hip-hop artist Yitz Jordan has struggled with his public image for years. Now he's ready to come out. 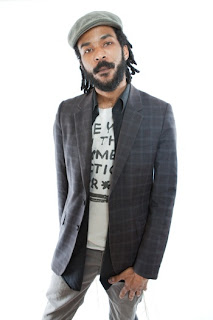 Most people have probably never heard of Y-Love. For a dedicated fanbase, however, Y-Love, aka Yitz Jordan, is a popular Hassidic hip-hop artist who raps in a mix of English, Arabic, Hebrew, Aramaic and Latin. That’s right: Jordan is an African-American rapping Jew. And now he wants the world to know he’s gay.
“I’ve never been conflicted about my sexuality,” Jordan told Out in an exclusive interview this week. “Any conflicts that have come up in my life have come up because of other people’s homophobia. I’ve always known when to be in the closet and when not to.”
So why come out now? According to Jordan, he’s wanted to tell the world that he’s gay for some time, but he was concerned that his “public reputation” would be tarnished and the music career he has fought so hard to carve out in a seemingly intolerant community would be ruined.
“I feel like I’ve wasted years of my life worrying that it would alienate the community I dedicated my life to as an artist and as a man. But my hope is that it will open their eyes—and hearts.”
But there’s an even more understandable desire. At 34, Jordan hopes he’ll be able to finally date “in the light.” After a brief, failed marriage to a Jewish woman and dealing with the constant attention of matchmakers for years—and even a form of blackmail when one suitor’s brother “outed” him to rabbis—he wants to date men openly and build a future with a man.
“My number one priority is to get back into dating. I’m ready to find a husband,” Jordan says. “I’ll be able to have a dating profile and use my real name. I’m ready to live without fear.”
In many ways, Jordan has already come to terms with the Hassidic community he once tried so desperately to cling to. He now calls himself “ex-Hassidic,” having moved out of the Flatbush neighborhood in Brooklyn where he once lived, and he now listens to secular music and appears in public with women. As he admits, “As far as the ultra-Orthodox community is concerned, I won't be able to return to any type of Jewish observance.” But Jordan clarifies, it doesn't mean he's lost his faith, in fact, he'll be observing a Jewish holiday next week.
Jordan has been battling for acceptance for years, and the details about his life have already proved inspirational for many. Born to a Puerto Rican mother and an Ethiopian father in East Baltimore, Jordan says he was attracted to Judaism since he was a child. After seing a commercial when he was 7 years old that said “Happy Passover from Channel Two.” He told his mom: “I want to be Jewish.”
It took him nearly After a circuitous path, he converted to Hasidic Judaism in 2000 and studied at Jerusalem’s Ohr Somayach yeshiva.  It was there that he started freestyling to aid in the learning of complicated texts. While, he kept at his studies, he also began to dedicate himself to developing his hip-hop skills.
For the past 10 years Jordan has worked with a string of well-known talents—including Lou Reed, DJ Spooky, Matisyahu and Immortal Technique—while building a fanbase interested in his “Jewish values” in hip-hop. After he signed to the independent label Shemspeed, he released his debut full-length album, This Is Babylon, in 2008, which many found inspirational. He later released an EP,See Me, produced by Diwon, another observant Jew, which also received critical acclaim.
Although Jordan discovered organizations for gay Orthodox Jews—like GLYDSA and the fledgling JQY—he continued to be conflicted, alternately embracing them as much-needed support groups and cursing them as heretics. He tried a form of reparative therapy for a time and lived a double-life that was not healthy for him until he says, it finally hit him: “It’s God’s will to be gay.”
Jordan hopes that those people who no longer find him “appropriate” will be replaced by “fans who can truly appreciate the real me.” He’s releasing a new single this week, "Focus on the Flair." The debut video for the title track may seem like an even more radical departure since, in the video, Jordan appears as he typically looks—beard, dread locks, all that hip-hop swagger—but he also appears in drag, among the dancers “vogueing.” It turns out that when Jordan was a teenager he was briefly involved in the ball scene, which continues to be popular in New York City today, and in this video, he wanted to “express a feminine side” as well.
When asked if he decided it was time to come out publicly because of all the positive discourse in the press as of late, Jordan says his catalyst was actually the opposite. “It’s because of the negative backlash that’s coming. Because people like Michele Bachmann’s husband are still pedaling ex-gay therapy. Because there are kids that are jumping out of their school windows. I know what it feels like, and so I have to say something.”
Over the past few months, Jordan says he’s been coming out to close friends, but he’s urged them not to post anything on social media sites so he could still maintain his previous reputation. Now he’s ready to tell the world.
“I’ve dealt with racism; I’ve dealt with discrimination,” Jordan explains. “I want to be there at that gay pride festival, for that kid who has a baseball cap over his yarmulke. I know what it feels like to have to hide.”
Watch the video for "Focus on the Flair" below. The single is available on iTunes, Amazon, andbancs direct.    VIDEO: Y-Love 'Focus on the Flair' ft. Onili (prod. Diwon)
Photo by Schneur Menaker