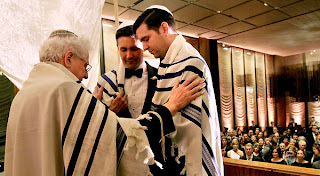 DURING a summer internship in 2007, Chris Barley thought that he had found a mentor in the architect Marc Kushner. Both were 6-foot-4, dapperly handsome and from religious families.

Lee Kushner, left, and Susan Barley with their sons.
Mr. Barley, a Mennonite from Pennsylvania Dutch country who had come to New York to study architecture at Columbia after graduating from Carnegie Mellon and working construction, quickly discovered that the admiration was mutual.
Yet Mr. Kushner, who was raised in a Modern Orthodox Jewish household in Livingston, N.J., did not have much work for the intern — he was half of a two-person firm that was just starting. To get Mr. Barley to stick around, he made up tasks, even asking him to walk his sister’s dog, which he was watching for the summer while she was out of the country.


“I was, like, the worst boss,” said Mr. Kushner, who received a master’s in architecture from Harvard. “I was mostly just concerned with getting him to like me.”
“He was different than other guys,”  he continued.  “There’s this kind of quiet optimism about him, not like the jaded world-weary New Yorker blah types that were everywhere else.”
Mr. Kushner began inviting Mr. Barley to dinner or to the movies, “like it was a normal thing for a boss and an employee to do this kind of thing,” Mr. Kushner said.
Mr. Barley said he found Mr. Kushner “amazingly enthusiastic.”
“He just has such an exuberance and joy about him, and that’s not common for architects,” he added. “They’re usually cynical and wear black.”
Each learned how different their lives had been up to that point. Mr. Barley, now 30, remembers a childhood of “picnics, cakes, pies,” herding cattle and raising tobacco and sweet corn on his grandfather’s farm. Bible study was a form of recreation. Dating and dancing were not allowed, but Mr. Barley didn’t mind. “I was a great little Mennonite,” he said.
“He grew up in, like, butter-land, I’m from margarine-ville,” said Mr. Kushner, now 34. “My family is all hyperactive ‘Oh, my God, we’re late, we have to achieve and right now!’ ”
Mr. Kushner’s boyhood leisures involved “indoorsy” pursuits, like watching television on his family’s many television sets. (Mr. Barley’s family’s set broke in the 1980s and still has not been replaced.)
The Kushners have long been prominent in real estate development and philanthropy in New Jersey and New York. (Jared Kushner, the owner of The New York Observer, is a first cousin.) Marc Kushner’s elementary school, the Joseph Kushner Hebrew Academy, was named for his paternal grandfather, a Holocaust survivor from what is now Belarus who founded the family business. He said that he and his brothers and sister were expected to work hard and to prove themselves.
Mr. Kushner was in high school when he came to realize that he was gay, but did not tell his parents until he was a senior at the University of Pennsylvania.
“When he came home from college totally buff with bleach blond hair and tortoiseshell glasses, they were like: something’s up,” said his sister, Melissa Kushner. “Then he said he was gay, and it was like, well, should we be upset about him being gay or about his bleached hair?”
Mr. Kushner said that “in the end, their attitude was that just because I was gay didn’t mean that the rules weren’t the same,” he said. That meant keeping a kosher home and marrying someone Jewish.
“To me, that was the ultimate sign of acceptance, that the ideas of the family and what family believes in still apply,” he said.
Mr. Barley had not told his family that he was gay and said he had not had a romantic relationship until he and Mr. Kushner began dating.


He quit the firm when he became involved with Mr. Kushner and described those first months as blissful. “It was a huge deal for me to be walking down the street holding someone’s hand,” he said.


He came out to his family by introducing them to Mr. Kushner. He said that they took it in stride. “His happiness is primary,” said his mother, Susan Barley.
Yet Mr. Kushner began having nagging doubts. “I just assumed that this really cute, outgoing guy had a history, just like everyone else in New York,” he said. “It was his first relationship, and I thought ‘I need to be really careful.’ ”
Also, Mr. Kushner added, there was “the Jewish issue.”
“I wanted marriage,” he said. “It seemed unfair to take marriage off the table.”
Toward the end of the year, Mr. Kushner ended things. “It was definitely unexpected,” Mr. Barley said. Mr. Kushner resolved to find a Jewish mate. “I got on JDate.com,” he said. “But it was horrific. As a whole, Jewish gay guys might be marvelous people, but the ones I met were insane.”
By summer 2008, Mr. Barley was interning again, this time with Rem Koolhaas’s firm in Rotterdam. Mr. Kushner flew there to visit him. “I realized he was what I wanted,” Mr. Kushner said. “He’s the one. We’d work it out.”
When Mr. Barley returned three months later, they signed up for a class at the 92nd Street Y for people interested in converting to Judaism, and Mr. Barley eventually did convert. Their careers moved forward. Mr. Barley graduated from Columbia and became a partner in a design and curatorial firm in New York. Mr. Kushner helped start a social networking site for architects called Architizer.
Mr. Kushner proposed at the Setai hotel in Miami during a Passover vacation with the Kushner family last year. He gave Mr. Barley a Rolex, which he returned because he wanted a Jaeger-LeCoultre.
“Even though we are both gay and nonstandard in that way, we were both raised feeling that marriage was something important and exciting,” Mr. Barley said. “I’d always liked the idea of marriage, but it wasn’t something I really pictured for myself. But then, it became a possibility, and that was kind of amazing.”
Mr. Kushner wanted the relationship his parents had. “There are two versions of my parents,” he said. “Growing up, me marrying a man would’ve been outside of the realm of possibilities. But by the time I proposed to Chris, they’d come around.”
During the December holidays, Mr. Barley and Mr. Kushner went to the home of Mr. Barley’s parents and took their own menorah to light.
“His parents are incredibly warm and welcoming,” Mr. Kushner said. “We just all sit and talk. And sometimes we sit and not talk! It’s amazing.”
Though both said the disparities in their families’ financial situations were not a concern, they did have a prenuptial agreement. “We’re not in denial that there are differences in our backgrounds, and a prenup was something that helped to neutralize that,” Mr. Kushner said. “The wedding was about a lot of things, but money wasn’t one of them.”
They were married on March 31 at the Four Seasons restaurant in New York. And it was Mr. Barley, the recent convert, who broke the glass at the end of the ceremony, which was led by Rabbi Samuel H. Weintraub.
The vows were recited under a wedding canopy designed by an architect friend of the couple. They plan to turn the fabric into a quilt. “Which is cool because quilts are a super Mennonite thing,” Mr. Barley said.
Added Mr. Kushner, “It’s always nice to have another blanket.”